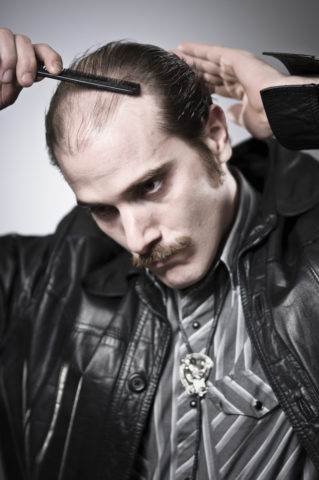 When a guy is ready to change his hair, chances are he’ll opt for a new fade, grow it long, or cut it all off.  Rarely do men consider playing with their sideburns, although simply changing them can make a dramatic difference that can improve one’s look significantly.

You may be surprised to know just how many different ways there are to rock sideburns.  Here, we’ll go over the most popular and flattering styles of all, in order to help you decide whether or not sideburns are right for you.

We love the mod-inspired look of a cropped haircut with long sideburns, which helps elongate the face while reminding us of the swinging sixties.  Simply keep your hair short, and let those burns grow.  It’s best if you don’t go crazy defining them, so that you maintain a more natural look.

Extra wide sideburns are becoming a major trend, and we’re seeing them being rocked throughout Hollywood.  They make a guy look older, which is great for men who have younger-looking faces despite their actual age.  Simply let the sideburns grow, and once they’ve reached the desired width, keep them buzzed relatively short to emphasize how wide they are.

After all, who wouldn’t want to look like the king?  Elvis’ sideburns are iconic, and not nearly as hard to pull off as you may think.  Simply embrace their natural thickness and width and be willing to let the hair on top grow out a bit too.  You’ll be surprised by how much you feel like a rock star once this look really takes shape, no pun intended.  And, pairing it with some retro sunglasses will really take things to the next level in terms of personal style.

Ah, mutton chops.  First a trend during the Civil War era, they remain highly popular today, but never so popular that they become a trend that we bore of quickly.  Mutton chops are very long, very wide and very thick, and easy to maintain because they don’t require heavy defining or constant styling.  It’s all about letting them fly, and exist in their natural state, to create a manly, rugged look.  Plus, they’re extremely flattering because of how they shape the face, and work with a wide range of face shapes to boot.

Boomerang sideburns are a style in which the sideburns don’t just grow downward, but slightly into the beard, creating an angular boomerang shape.  The width, length and exact curve are up to you, as long as the overall shape is there.  This is a great way to take the concept of sideburns to a more modern level, and stand out from the crowd, while being able to flaunt some facial hair at the same time.  Just make sure that you keep these sideburns well moisturized as they’ll be exposed more to dry air that can leave them brittle.

This is a look in which the sideburns grow all the way down the face, and along the curve of the jaw/neckline.  They stop just where the chin begins, which frames the face in a unique way.  Again, this look will require some extra care in terms of providing it with moisture.  You’l also wanna keep it relatively defined so it looks like you did it on purpose, not that you were just feeling lazy.

There’s nothing like rocking some sideburns when you’re ready to change your look.  Instantly, you’ll take on a more mature, more masculine appearance.  Explore the various styles listed above to decide which look is right for you.