Are Men’s Crew Cuts Coming Back in Style?

Which Type of Slicked Back Hairstyle Will You Choose? 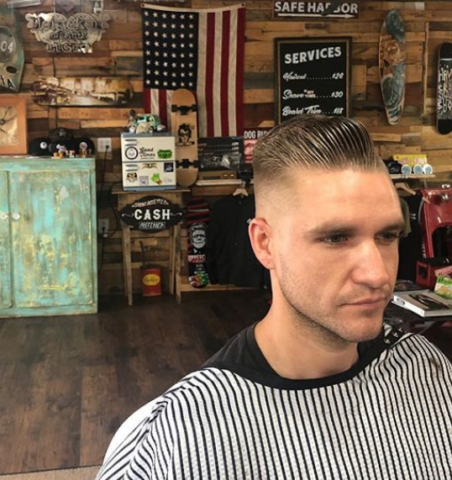 If you’ve been paying attention to trends in hair-care, you’ve probably noticed that you’re seeing a lot of crew cuts lately.  Many would say that crew cuts are universally flattering, which is probably why they’ve been popular for centuries.  However, despite the fact that they seem to work with every hair type and face shape, they took a backseat for a while as other haircut styles became trendier.

So, is the crew cut coming back?  And, if so, is it worth running out to the barbershop to get one?  We’ll be discussing the iconic crew cut and whether or not it’s right for you.  We’re also going to help you figure out the best way to style it so that your hair looks as flawless as can be.

What is a Crew Cut?

A crew cut is a popular type of haircut that is relatively short.  The front of the hair is the longest, and it’s styled upward to form a very subtle pompadour.  The length slopes toward the back so that the crown is very short compared to the front.  Typically, the sides and back are kept very short as well, but some men prefer to have a medium length on the side and back instead.

Crew cuts, surprisingly, have been around since the 17th century.  They became extremely trendy during the 1890s when members of Ivy League schools began to wear them as a way to distinguish themselves.  During the 1920s and 1930s, crew cuts were extremely popular.

It’s safe to say that crew cuts are back.  This laid-back, effortless and tidy style is the most popular look of the year.  So, if you want to be on trend and enjoy a hairstyle that requires minimum maintenance, a crew cut is probably for you.

How Can a Man Achieve a Crew Cut?

If you want a crew cut, we recommend visiting a professional barber.  That’s because this look requires some careful shaping, and if you’re not experienced in cutting hair, you might not pull it off correctly.

How Can a Man Style His Crew Cut?

Once you’ve gotten your crew cut, it’s crucial that you take the time to follow a hair-care routine each day.  Besides making sure that you trim, wash and condition your hair regularly, it’s important that you know how to style it.

And, when it comes to styling that crew cut, nothing works as well as our pomades.  As you know, a crew cut isn’t a crew cut unless the front is sticking upward to form a small pompadour.  Now, not every man’s hair naturally grows upward, so a pomade is the best way to ensure that the shape and style is just right.

We offer a wide selection of pomades for all different hair types.  No matter which one you choose, the actual styling that’s required is very simple.  Just rub a little bit of pomade between your hands and comb it into the front part of your hair with your fingers.  Make sure that you style it upward.

The good thing about this trend is that it’s relatively low-maintenance and looks great on virtually every guy.  So, if you wanna change up your hairstyle this summer, visit the barber and invest in some hair-care products from DJP to look your very best.